We attended FOSS4G this year in Denver, Colorado. Friday was a PostGIS bonanza with 5 PostGIS talks back to back including ours. The crowd was huge. All the PostGIS talks as I recall were so packed that there were not enough seats to accommodate everyone. A more comprehensive detail of the events is described on OpenGeo FOSS4G Day #5

We admit to overstuffing our slides with SQL and ran short on time at the end. Leo complained and vowed to do a better job next time. We really weren't expecting such a large crowd. Admittedly I'm all for the after conference experience which is much longer than the conference which is why I tend to make slides that are very dense. WARNING: The following slides feature SQL doing unconventional things suitable only for mature audiences. Viewer discretion is adviced.. You can check out our slides here PostGIS 2.0 the new stuff.

We've started work on CREATE EXTENSIONS and have it functional which you can see shown in the pgAdmin snapshots in the slides and the pictures below. 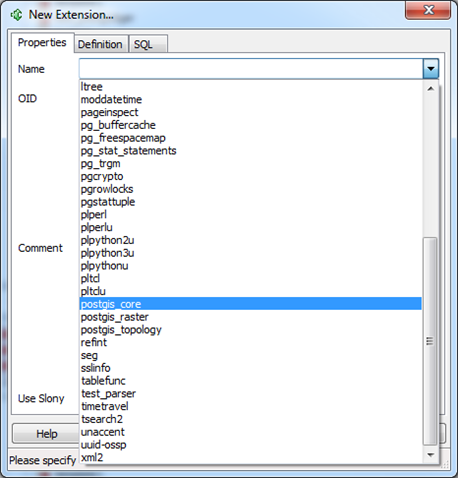 In the PostGIS code sprint we attended on Saturday, one of the decisions was to combine what we call core with postgis_raster and make raster compilation not optional. To make this easier, we will be simplifying some of the requirements for compilation of raster like working on making raster2pgsql a regular binary not dependant of Python and also just making the python check a warning. The only python dependency we have in raster is the loader.

There are some other kinks that need to be worked out in the extensions mostly to do with uninstall, install from unpackaged, upgrading, move to different schema. There are some errors we are getting which may be issues with the extension model or the way we are executing it. More on that later.

Lots of people have been asking about this. It is not currently available in trunk, but Paul has funding to make it happen so its planned for PostGIS 2.0 release.

When will PostGIS 2.0 be released

Much later than I would like. We decided to have our code freeze November 30th, first beta December 1st and final release probably early February. I think we had a lot of scope creep, mostly becasue we had no well-defined scope to speak of. I don't think that was a bad thing though. It was more fun to see the features unfold than to have them granularly defined on the outset.